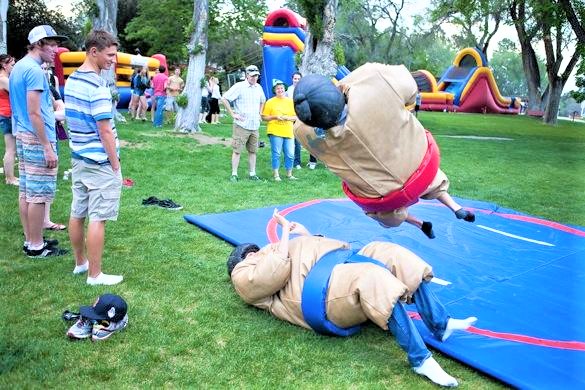 Senior Appreciation Night Created in 1984 to Save Lives

Los Alamos Monitor newspaper articles in the 1970’s and early 80’s documented an upsurge of drinking and driving by youth around graduation. Parties in the mountains, where police had no jurisdiction, were prevalent and had led to several wrecks and deaths.

The crisis flared high in May of 1983, when a speaker by the name of David Toma addressed the students and was interviewed by the Monitor. Toma promoted an absolute stance against intoxicants and promoted a hardline attitude with parents, which according to an article did have a profound effect on some students. His ideals were bantered around in letters to the editor in the following days. Some parents took the line that insisted youth stay home and sober. Some said that was unrealistic and promoted a Dial-A-Ride program started by the Youth Activity Center in 1983. Other letters criticized that. Also, the youth cited a year-round lack of activities and places to go.

The town was facing other growing pains around this time. Actions of the rowdy class of 1982 necessitated Los Alamos High School policy changes in regard to the graduation ceremony. A May 8, 1983, editorial cites that class for catcalls, fireworks, paper airplanes and rudeness, and mentions a code of conduct that was now to be instituted. Students have been required to sign that code to participate in graduation ever since to keep the ceremony solemn.

To address the graduation drinking and driving, a group of community members and organizations, led by then acting Chief of Police Gary Bequette, hoped to create an alternative, safe and supervised celebration. They created and hosted a Senior Night in 1984.

Gary Bequette had once been Captain, and eventually retired as acting Chief at the Los Alamos Police Department after 22 years of service.

In an interview in 2018, his daughter Linda Bequette said, “Dad always loved the community. Whenever he saw a wrong, or something that was going to harm families, he tried to come up with ways to help the community, to where it would save lives,” she said.

“He got tired of seeing the kids go up to the Dome (Forest Service property) after graduation; inevitably there would be three or four accidents each year, resulting in injuries that were maiming kids for life, and he saw quite a few fatalities.

“He tried to think of a way to keep kids away from there. The police would patrol, but it still ended up bad. He approached the school board, and several business leaders to see if they were interested in doing an activity to keep the kids in town.”

The community responded to Gary Bequette’s call to create a compelling, fun evening for the graduates, the first of which was held in 1984.  Organizers included a group of parents, civic leaders and Los Alamos Recreation Specialist Peggy Vigil Pendergast. They all promoted the idea of a Senior Night that offered supervised activities throughout the town and night. It included grand-prize giveaways as incentives for youth to attend. The graduates came in droves.

Today the safe, supervised downtown graduation celebration is known as “Senior Appreciation Night” or SAN and is co-chaired by Los Alamos County Recreation Department staff and The Family YMCA. Various volunteers, parents and local organizations support the event each year.

It takes volunteer committee members 6 months to plan, organize and fundraise about $10,000 for the event. SAN wasn’t held in 2020 or 2021 due to a pandemic’s health-gathering restrictions.

The County supports the event in the donation of staff and space and transportation, and The Family YMCA provides a co-chair, space, and is SAN’s fiscal agent. Past supporters and organizers of SAN have included the public schools, the Youth Activity Center, Los Alamos Teen Center, the Elks, Civitans, VFW, Rotary Club, Lions Club, Noontime Kiwanis, the DWI Planning Council, and numerous churches, individuals, PTOs and business.

Gary Bequette served with the Los Alamos Police Department for 22 years, then worked for LANL’s emergency management department. He suffered a heart attack during the 2000 fire that precipitated his retirement. Gary Bequette passed away on July 22, 2016.

Six years before his death, in 2000, he watched kids in sumo wrestling suits jump on each other during SAN where his daughter was volunteering.

Tears in his eyes, the 71-year-old told his daughter, “I am so thankful that this is continuing.”